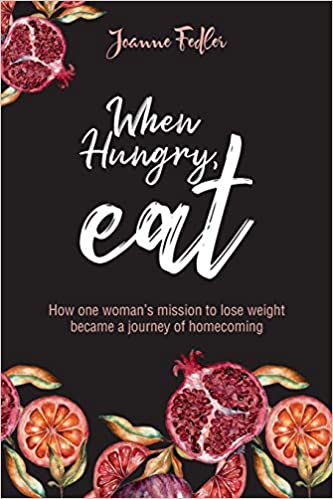 Purchase on Amazon
When Hungry, Eat

By the time my fortieth birthday loomed, I’d married, had two kids, left the country of my birth for another and picked up plenty of baggage along the path.

I was long overdue for a spiritual spring-clean. But I couldn’t very well take a year off to meditate in an ashram. Who was going to make the lunchboxes?

So instead, I opted for doing something about the fatty deposits on my rear-end before they fossilized.

And that’s where this story begins. Or so I thought.

A photo of herself in a bikini on her son’s fifth birthday led Joanne Fedler to take stock of her life. How had she reached a point where she could barely look at her own body without cringing?

Armed only with the certainty that she did not want to be ‘fat and forty’ Joanne decided it was time to get rid of the excess weight she’d been carrying for far too long.

While on a strict new eating plan in which she radically changed her relationship with food, Joanne began to see it wasn’t only pounds she needed to lose, but the weight of fear, guilt and anxiety she was lugging around in her heart.

In making friends with hunger and dropping a few dress sizes, Joanne found greater peace not only with her body, but with herself, her life and her adopted country. What began as a mission to get back into a bikini became a journey towards acceptance, proving that a spiritual journey can start by saying ‘no’ to the chocolate mousse.

When Hungry, Eat is a celebration of unexpected spiritual insight, small portions and the gifts of hunger.