Being with What Is Leaving Us 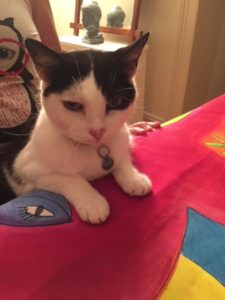 I have never nursed a dying person.

Regrettably, I have killed many a plant. Not on purpose. But it seems as if I’m afflicted with a negligence – perhaps more generously understood as a failure of translation – between caring for fauna and caring for florae.

I have listened to stories and read books about ministering to the dying – a mother, a spouse, a sister, even, god-help-us, a child. My husband rushed back to South Africa to be with his mother in her final weeks of life. It involved nappies, holding hands, watching her writhe in pain, released finally by morphine. I have heard it is unglamorous, raw – a gateway into a secret chamber only those who have held space in this way will ever know. Many accounts talk of the liberation from the pain of personality – how it is possible to find love and forgiveness in these brutally real hours before a relationship is extinguished, at least in material form.

Much as I have prepared for these times, in Buddhist practice now and then, in contemplation and vicariously, I have not been there yet.

My cat Tanaka has recently been diagnosed with chronic kidney disease. She is seventeen years old, as far as we know. We got her from the RSPCA some weeks after my family arrived in Australia in the spring of 2001. We had promised our kids, aged nearly 2 and 4 that we would replace Rain and Shadow, our beloved pets we had to rehome before we immigrated.

Tanaka was the youngest cat there – at around 9 months old, already erroneously christened – by whom we have no idea – for Tanaka is a male, not female name. Having spent nine months in a cage and almost too old to be cute, she was catatonic when we got her. Unresponsive – more so than is usual in cats. We loved her back to life. Queenly from the start. Neat paws. Extremely chatty – in a sort of back-and-forth if you echoed her mews. Zed taught her to ‘jump’ like a Lipizzaner, over his torso, back and forth, back and forth. She amused us for hours this way when we got bored of television. She slept at the end of my bed most years. In the heat of summer, she refused to come indoors. She’d watch us from the neighbouring property call her from the backdoor, saunter in when it suited her, but sometimes we’d have to send my son down to get her. 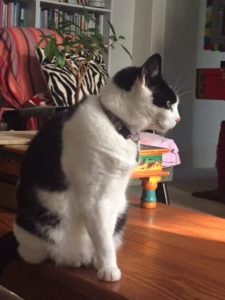 In her early years, she got into a fight and had an oozing abscess on her abdomen the vet informed me would cost around $500 to treat. As new immigrants, we didn’t have that kind of money, so I treated it myself. She let me squeeze it until it cleared, as if she understood I wasn’t intentionally hurting her, but helping her.

One year I went away to Bali to teach a writing retreat, and returned to find her face skew. No-one in the family had noticed. She was diagnosed with a form of Bells Palsy which eventually cleared, but needed me to treat her unblinking eye with eyedrops twice a day to prevent her eyeball from drying out.

Her white nose was always a worry – especially because she spent so much time on the fire-escape in the sun. She got nose cancer late in life. She had a procedure to cut it off, but when she recovered from the anesthetic, her third eyelid covered her right eye from nerve damage. It remained this way for months and we accepted she’d never recover, but it eventually did.

Author, writing mentor, retreat leader. I’m an internationally bestselling author of nine books, inspirational speaker and writing mentor. I’ve had books published in just about every genre- fiction, non-fiction, self-help, memoir – by some of the top publishing houses in the world. My books have sold over 650 000 copies and have been translated in a range of languages. Two of my books have been #1 Amazon bestsellers, and at one point the German edition of Secret Mothers’ Business outsold Harry Potter- crazy, right?

Tanaka hated the car. In the years we inflicted trips to the vet for her annual checkup, she’d froth at the mouth, urinate and defecate in her cage. We soon found a travelling vet who came to us. It was the least I could do for her.

On mornings when I’d meditate, Tanaka would approach me, her purr loud and deep. She’d caress me with her tail and find a place close by to sit with me.

Our friend Melvin called her a ‘horny-assed cat’ because if you patted her lower torso, she’d raise her bottom. She didn’t like her tummy or her toes to be touched. Zed couldn’t help himself and would tease her trying to touch these off-limit parts. She’d often win, leaving him with bloody scratches.

When she was a young hunter, she’d often bring beheaded rats and disemboweled birds into the house.

She survived four moves and outlived two other cats we got over the years – Midnight, who died within two years of feline Aids, and Jinx, whose life ended after five years under the wheels of a car outside our apartment. Tanaka despised other feline company and was never so happy as the two years in which she was the only cat in the house. Then Archie came along. Tanaka disapproved from the start. He was a handful. A bully. She chose to spend more and more time outdoors. 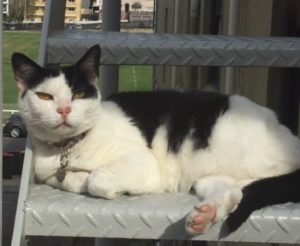 In the past few months, she started losing weight rapidly. I noticed she was thirsty all the time. Tests show she has chronic kidney disease. We’ve put her on antibiotics, bought expensive ‘renal’ food which she hardly touches. But she shadows me wherever I go. Every day she lies on my bed, and I wrap her in a blanket, making her a ‘housey-wousey’ as we call it, where she can sleep all day away from Archie and his annoying pranks.

Now at night, I lie with her beside me, a raggedy parcel of cat-bones and fur, my heart bursting. ‘At most, a year,’ were the vet’s words. But with so little appetite, I wonder.

I have never nursed a dying person. My time will come. But here I am, loving what is leaving me. It is a painful, exquisite gift. I am in presence with impermanence and the fragility of life and friendship and unconditional love. I rest my head beside her and tell her the story of our friendship. She musters a mew, without sound. She purrs into my hand. She knows me so well. I don’t want her to go. And I am filled with tender gratitude.

What Is My ‘Writing Voice’ and How Do I Find Mine?

What Is My 'Writing Voice' and How Do I Find Mine? Our writing voice is not something that’s lost that if we look long and hard enough for, will eventually turn up like a pair of mislaid spectacles that have been hiding under a pile of unopened mail. It is a fluency...
Read More

Mistakes to Avoid When You Write a Self-Help Book

I’m such a huge fan of a great self-help book which can raise our vibrational frequency if the author wrote it with energetic integrity - not from a place of ego, but rather as a transmitter of wisdom and as an act of service to the reader. A book like this is often...
Read More

How to Stop the Great Unravelling at Midlife

We have two lives, and the second one begins when you realise you only have one. - Mario de Andrade You will wake up one day and without looking at your iPhone, you’ll know that you are running out of time. This bolt of insight will have less to do with your age in...
Read More

Paths Are Made by Walking

One of the most important books I ever read as a law student was Professor Patricia Williams’ The Alchemy of Race and Rights. The book opens with this line, ‘Since subject position is everything in my analysis of the law, you deserve to know it’s been a bad day.’ What...
Read More

Why I Struggle to Share My Writing on Social Media

“You should share all your work on social,” an editor told me firmly, some years ago. And from then on, I did. Every time one of my articles was published, I dutifully posted a link to Facebook. And each time I felt miserable, as I anxiously awaited the...
Read More

It’s Too Late to Leave