I rushed to South Africa mid-December, when I got that call. You know the one. Your father is critically ill. During the 14-hour flight, I prayed. Please let him live. I cried when the lights went down. I didn’t know what I was flying back for. A protracted, drawn-out recovery? A father incapacitated? A funeral?

I went straight from the airport to the hospital to see my great big lion of a father lying unrecognizably helpless and attached to a squadron of machines that go ping.

It will be a good story someday. But it wasn’t when, later that night, I prolapsed a disc in my back, and ended up in the same hospital as my father for treatment. Two days after that, my older sister nearly fainted and was admitted to hospital for a week with labyrinthitis. We were dropping like soldiers on the frontlines of a poorly planned military expedition. I spent Christmas, New Year and all up four weeks in physical pain that brought me to tears; dosed to the max on painkillers, anti-inflammatories and muscle relaxants, unable to visit my father again while he recovered slowly in hospital. 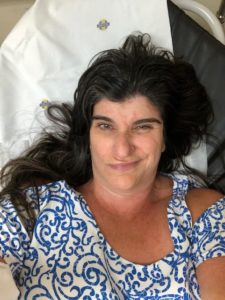 Pain is a strict teacher. She demands attention and doesn’t let it stray from the present moment. While everyone was making bold New Year resolutions, I just wanted my body back. Facebook was torture – it was excruciating to see everyone’s celebrations, overseas holidays, or simple joys when I could barely make it to the loo. I learned just how sorry I can feel for myself when I am not upright, strong, capable, dependable, a fixer, a do-er, a person others can rely on.

With each passing day, I was shown a different side to myself, and I struggled to like her.

I’ve known for some time that I’ve been shuttling at a warping pace. I have needed to slow down. Well, here it was. Enforced rest. Enforced nobody-ness. I became someone who could barely stand on her own two feet. So I did the only thing I could – I lay on a bed and worked on my new book. Joanne Fedler is an internationally bestselling author of 10 books, writing mentor and publisher. In the past seven years, she’s facilitated 12 writing retreats all over the world, mentored hundreds of writers (both face to face and in her online writing courses), set up her own publishing company, Joanne Fedler Media, and published four debut authors (with many lined up to follow). She’s passionate about publishing midlife memoirs and knows how to help people succeed in reaching their goal to become a published author.

Sometime during this season of horizontality, I wrote this poem:

How to console
the bruised animal of the body
become the kind of hero
you never really want to be
because who would ask
for this pain
even in the name of
transformation and self-development?
Then to find
the spare change of compassion
a true charity
for everything in you that is broken
and may never be fixed
to seek metaphors
for the injury
try to see it through God’s eyes
not take it personally,
this affront to the ego;
trust the story
that is telling itself
through your wretched hours
and call in the happiness
of small mercies
like the water
on your skin;
the sun shaft through the window
that lands on your face.
My friend Gabriela asked what I wished for 2019. ‘Just to be free of pain, strong and healthy,’ I said. To which she wisely responded, ‘None of us will ever be pain free in this life…. Perhaps wish for pain you can handle. Or even better that your faith in a higher power changes your perception of pain so greatly and gives you other things to prioritize that you forget about your own pain. Or even better yet…that you are able to soothe the pain of so many other souls that yours becomes infinitesimally negligible. Right there is a prayer worth praying.’

Harder to bear than the pain itself, was the treacheries of my own consciousness. I wanted more than anything to trust these words of Mary Oliver:
‘All things are inventions of holiness, some more rascally than others.’
My family and I have had a rascal of a time. But perhaps I am exactly where I am meant to be as I learn to love the parts of me that are no ‘use’ in the world; the person I am when I can offer nothing to anyone; when I feel small; unaccomplished; terrified. I had hoped to write a different kind of New Year email to you all – to inspire, lift you up, tell you of the great plans I have for 2019 and the opportunities I want to open up to any of you who want to write. I still hope that email will be written. But now is not the right time as I navigate the uncertainties of the coming weeks – like whether my father and I will both be well enough for us to launch his book If You Can Write, You Can Draw, and how I will manage the flight back to Sydney at the end of January. 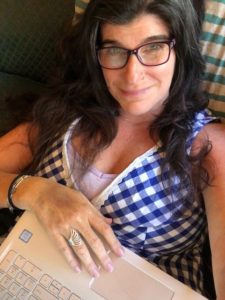 My incredible team have rallied around me, and assured me that they will make sure we are able to offer the 7 Day Free Writing Challenge again to anyone who didn’t finish it or would like to redo it. We’ll be launching my brand-new website soon with heaps of beautiful resources, materials and courses. I will be so ready to offer The Midlife Memoir Breakthrough workshop in Sydney in March (I think we have one or two spots left).
And as soon as my body releases me from solitary confinement, I hope to bounce back into the world, with renewed insights, offerings and energy.

I wish you all a sense of belonging – to your body and soul – no matter what 2019 brings your way.

If you ever want to learn how to build a successful business, grow your team, create online programmes, become a publisher and burn yourself out in a few short years, just follow my example. Since 2014, I’ve been on an exhilarating, heart-opening, community-building...
Read More

I am who I am because of my father. Early on, it was evident that we shared common interests – common connections. He instilled in me a love of the theatre. I joined him on stage in amateur productions from the age of nine. Playing the lead role in high school plays...
Read More

1 It is four years to the day. The pillow next to mine whispers this in my ear just before I open my eyes to the careless daylight. I wonder if it is a deficiency – perhaps a leak sprung in me after he died - that in all the time that has passed since we lay together...
Read More

He was a rising Kwaito star. His callous nature and rugged looks evoked the kind of fear and enamour that was synonymous with guys from the township in those days. Some girls loved him but most loathed him. Their hatred and affection were badges of honour that he wore...
Read More